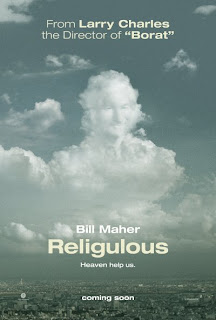 I won tickets to an early screening of Religulous and took my brother to watch it earlier tonight. The film was directed by Larry Charles (of Seinfeld, Curb Your Enthusiasm, and Borat fame), but clearly this was the Bill Maher show.

The movie follows Maher as he treks around the world trying to find out why people believe what they do. He is basically questioning them as to why they are so certain, as he himself tries to promote doub.t The movie primarily focuses on western religions, but in the latter half he tries to do a lightning round with other faiths (ie. Scientology, Mormonism, Islam, etc).

He interviews a bevy of loony characters to ensure laughs, and oftentimes with a smug and arrogant flair. In that sense, the movie works as it balances with more serious talks as he learns about other religions. But more often than not, the discussions are with wacky people rather than learned professionals.

One of the high points for me was a scene in a London park where he pretended to be a Scientologist fanatic. He barked out various Scientology tenets to the bewildered crowd, before a gentleman, who probably thought he was crazy, placed a balloon crown on his head. Random and hilarious.

My main problem was that he had all these good and deep questions, but he never really brought them forth to experts. Instead, he would ask these questions to oddball characters ie. the Jesus actor an amusement park, a pot smoking preacher in Amsterdam, bunch of people at a trailer truck church, a wacky Vatican priest, etc. Had he asked more well-versed professionals, I think it would have been more insightful. However, I understand that he was trying to insert a comedic tone to it, so I can partly forgive him. I guess, I just wish that it had been deeper.

And that's another thing, the comedy bits. The way the interviews were cut was in such a fashion that you knew it was manipulated to try and make the interviewee look like a dumbass. The cuts didn't seem seemless and hurt the flow. I did laugh during the movie, but there were no huge big laughs, and the reaction with the audience seemed lukewarm at best.

Lastly, and this is more of a preference, I wish that more time had been devoted to talk about other religions. I'd say more than half the time was used on Christianity and Catholicism. Since he was going for humour, I would of liked to see more of those strange and wacky religions. He did interview the leader at this one "church" where the leader claimed to be the second coming of Jesus. WACKY! According to the accompanying text, this church had over 100,000 followers worldwide.

As a Christian, I thought going in that I was going to be offended, however I was not. I've watched a bunch of his standup comedy stuff as well as a bunch of his late night talk show appearances, where he seemed more racy than in this movie. After it's all said and done, I'd have to say thumbs in the middle. It made me laugh at parts, but was not wholly satisfying. Later geeks.

Unknown said…
After watching the previews online and on television, it looks amusing at best.

I would like to see the film, but would definitely bring some grains of salt.

@Late Night Laundry:
I get tix from entering contests either in newspapers or on a few internet sites.

@David:
I've seen the trailer for W. once I think and it didn't exactly leave a lasting impression. I'm sure that in Oliver Stone's hand that it would be fine. I suppose I'd have more of an extreme reaction if I were an American. I understand George Dubya is a goofy dude sometimes, and I guess the movie plays on that a bit by portraying him more as a caricture. I'll wait til it's on video, unless it gets blowaway reactions from critics.
October 3, 2008 at 1:07 PM

Fetiche Nouvelle said…
Maher is pitiful. He has such a need to denigrate the convictions of others that it calls his own into question -- which is probably what he's trying to avoid confronting.
October 3, 2008 at 9:09 PM