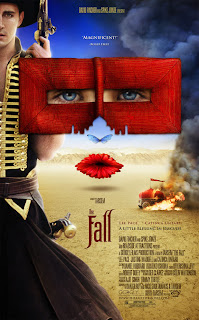 Lately I've been thinking to myself that there hasn't really been many great movies this year. There's been a few good ones, but only one really great one, that being The Dark Knight. In my head I was starting to compile my top 10 list for the year thus far and had some difficulty even filling in the ranks of the top 3. There are a few I'm wildly anticipating over the next 3 months, but whether they'll hold up to scrutiny remains to be determined. Which brings me to The Fall.

The first thing I should mention is that as I was looking for reviews for The Fall, I found that there was quite a backlash from amongst the geek community for Tarsem's first feature, The Cell with JLo. Overnight, geeks criticized it for being too hollow and "visually arresting". They claimed that he was pretentious both by representing himself by one name and delivering something artistic-for-artistry's sake.

I remember my brother coming home after seeing it in the theater, and telling me how much he loved it. A few months later, we rented the flick on good ol' VHS and after watching it, I didn't find myself as enamoured with it as my brother was, but I thought at least it looked really cool. I don't think during that time I've watched anything like it before.

With The Fall, I believe Tarsem has fully redeemed himself. Believe it or not, this is only his second feature.

The movie takes place during the 1920's and is about a young girl, Alexandria, in a hospital who befriends a stuntman named Roy, who is there as a result of an accident while shooting a movie. Roy keeps her on the edge of her seat by telling her this epic drawn-out tale bit by bit everyday. With every favour she completes for him, Roy tells her a bit more. Throughout the movie, we're seeing this grand adventure through the eyes of the young girl, every detail as she would imagine it.

The tale itself is about a team of 5 adventurers: a masked Bandit, an Indian, an Ex-Slave, an Italian Explosives Expert, and... Charles Darwin. Shortly they are joined by a mysterious character only refered to as The Mystic (actually none of the characters are named, they're just refered to by their titles). Together they embark on a journey to kill The Governor, of course all for their own motives.

What makes it interesting is that as Roy is telling the story, his and even Alexandria's emotions bleed into the story as it's being told. When they are happy, the story is happy, when they are feeling sad, the story takes a turn. At the end of the movie, there is almost a Wizard-of-Oz-like-feel. I'm not sure if it's a direct nod to that movie, but you can tell there is obviously some sort of influence.

Another movie I was reminded of while watching it was The Usual Suspects. In both movies, you have a team comprised of unique individuals, each with their own talents or gifts, as they work together to accomplish a common goal. However, don't expect a twist a la Usual Suspects.

I read one review that claimed the plot was weak compared to the fantastic visual style. I have to disagree. In context of the movie, it all makes sense. You have a grown man telling an 8-year old girl a story so of course the plot has to be simple or else she wouldn't understand it.

In terms of the unique artistic style, that as well made sense in context of the movie. It's Roy who tells the story, yet everything we see onscreen is how Alexandria interprets it. Everything is colourful, vibrant, and wildly imaginative, just as a young child's imagination would be. The kicker comes at the end of the movie where they show a few glimpses of how Roy actually imagines it. It just feels awesome because you realize afterwards that during the whole movie this is what he was imagining, while at the same time we were seeing something totally different.

Tarsem's eye for visuals is second to none. I mean, love it or hate it, but The Cell was quite revolutionary in its art direction. In The Fall, he uses a similar palette in painting the world we see during the storytelling portions. What's more astounding was that he was able to achieve all this without the aid of CGI which is so commonplace these days (scroll down to view the trailer while keeping that in mind).

All the locations were quite beautiful as well. If I read correctly, it took Tarsem approximately 4 years to complete this movie, which was shot over 28 different countries. Despite the wide array of locations, he was able to cut and make the film in such a way that everything looked different, but at the same time, everything felt together. There was a strong sense of cohesiveness based on all the sceneries alone.

The last thing I should note was the acting. Everyone did quite a magnificent job, and for a cast of relatively unknown players, this was a great accomplishment. Much of the credit must go to Catinca Untaru who played Alexandria. She played the role well of being curious and adorable at the same time. This was her first and only movie, and apparently, before shooting this movie, she had hardly spoken any english.

I've attached the [God forsaken] Youtube trailer to the end of this post, but if you want better quality, check out the Quicktime version (here). The trailer is a bit more spoilerish than I would of liked, but thankfully it only gives you a brief glimpse of all the beauty that lies within.

This is definitely a candidate for #1 on my list, however I'm still undecided as Batman was pretty kick-ass this year. Anyhow, check out The Fall on DVD or BD if you can, this movie is simply gorgeous and well told. Later geeks.

Kevin said…
It looks intriguing, and definitely has that artsy feel to it, but it sounds rather eccentric...
October 7, 2008 at 5:28 PM