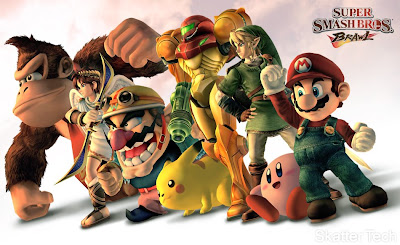 Alas, Super Smash Bros. Brawl. Now, I'm not a big fan of the Smash Bros. series fan at all, and I after playing this game, that hasn't changed. In fact, this is only the first incarnation of the game that I've actually played. I think it's the simplistic nature of the game that passes me by. If you can mash buttons on a controller, then you're ready for Smash Bros. As a kid, I grew up on Street Fighter II: World Warrior as well as the original Mortal Kombat... games where key combinations were the road to victory. Random mashing just didn't cut it back then.

But I suppose the simple nature of the game appeals to a wider generation of audiences, something the Wii has excelled at since release.

I think the only thing I really liked from this game was the single player campaign, dubbed The Subspace Emissary. Basically it's an old-school side scroller, with a storyline that ties in all the available characters within the game. I finished the campaign on the normal mode, and it was still too easy. It's pretty fun and quick. The CGI work in the campaign were pretty darn great. The only complaint I really have is the last level, The Great Maze. It took almost 2 hours to beat this level, and it was not that it was difficult (I didn't wipe out once), it was just terribly long. I mean, to make a challenging last level, it doesn't have to be long... just hard (Note: as an aside, that's what she said).

However, when it's all said and done, it's still amusing to see characters across a wide range of games come together for a common cause. It's still wild to see Snake from Metal Gear Solid and Sonic the Hedgehog appear in a Nintendo game. It makes me wonder, how come they couldn't get Mega Man in? It would seem like a logical addition. Well... here's hoping he's in the future game(s).

I think the game is fun for kids, but as for us older geeks, we might wanna stick to Tekken, Soul Calibur, or Street Fighter IV... huzzah! Later geekerinos!

The Cheap-Arse Film Critic said…
I see your point about it being simplistic, but I honestly think the point of this game is that it scratches some sort of fan-fictionish itch. I mean, who DOESN'T want to see Sonic lay the smackdwn on Mario, or Solid Snake shoot Yoshi in the face?

The Lam said…
@Mike:
It does nothing for me either. It boggles me that they would have international tournaments for this game.

@cheap-arse:
I think the gaming crossovers is the only thing I genuinely enjoy about the game. I've played it with a buncha friends, and it always seemed like I was having the least fun. I guess as long as others are getting a kick out of it, that's okay. And yes, I agree about not being sober.
October 21, 2008 at 1:36 PM

Unknown said…
This game is hard core weird. I definitely recommend a case of Coors or LaBatt Blue for this one.