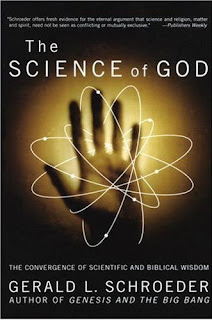 Not too long ago, two of my friends had posted their thoughts on evolution and creationism. Both friends shared similar sentiments on the topic (you can view Skylar's here and Keith's here). Coincidence or not, shortly before they made their postings, I purchased a book called The Science of God by Dr. Gerald Schroeder, which was based on the same topic. Unfortunately, at the time of my friend's postings, I had not finished the book, but now I have.

In describing time, he focuses on the 6 days that are explained in the beginning of Genesis. During the inception of the earth, the physics of the world was in such a way that time was able to slow down. The days that are described in Genesis are equal to 24 hours as we understand it, but billions of years are represented within it. He clarifies the description by using simple quantum mechanics. Without getting into Einstein-isms, remember that example in high school physics, the one about twins, where one would stay on earth, and the other would fly in a rocket ship that moved at the speed of light? Say the rocket boy was only in space for an hour relative to himself, but on earth, many years would pass and his brother would be much older. The same can be applied to the days described in Genesis. Furthermore, because of those physics, time as we understand it works like a decaying exponential curve, where those first days represented millions and billions of years relative to how we understand time now, but as 'days' go by, the amount of time represented in a day tapered off (it hit its asymptote) and is calibrated to how we measure time today.

In a chapter about evolution, he describes how the order of creation as described in the bible, parallels the theories of science on the order of evolution. An interesting comparison he makes is between the human eyeball and the eyeball of an octopus. Here we have two creatures that are so different, yet all the components that make up their eyeball are essentially the same. He explains that the statistical probability of this occuring for two separate creatures are so low that it might as well be zero chance.

He gives us a treat at the end, concluding the book with a chapter on dinosaurs and their possible existence. But I shan't spoil that for you, my fellow geeks.

These are of course but a few of the things he talks about in his book. Schroeder himself is a physicist who gained his B.S., M.S., and Ph.D. from MIT. But for the past 25 years he has been studying the interpretation of the bible.

I think as an engineering graduate, I can appreciate some of his explanations. To explain some of his theories, he uses established mathematical formulas; some from thermodynamics (I was pleasantly surprised by my old friend, the Arrhenius equation) but mostly from statistics. One thing Schroeder does well is explaining their meanings and uses in laymans terms, so if you were not of a mathematical or scientific background, you could still understand what's going on.

Right now, I'm not sure if I'm convinced on these theories. I respect the perspective, find they are coherent, and they are certainly plausible, but I mean, as Christians, we believe in a God that someway somehow came down to earth, died, and came back to life... what? Death to life. If we are to believe this, then is it a stretch to believe that the description in Genesis is literal? I mean, He is a God of wonders and of miracles, so I can't doubt the possibility of His works.

Sometimes it seems as though we ask these questions and try to fill that void by applying what we know of earth through science, math, etc., in some way to satiate our own curiosity. But we should not forget what the Lord says in Isaiah 55:8-9:

I will end this post with a quote from Schroeder:

"Randomness just doesn't cut it when it comes to generating meaningful order out of chaos. Direction is required. Always."

SkyCapitan said…
Thanks for the summary, bro. When you first linked to it, I read the synopsis and thought it looked interesting. Now I'm even more interested. I'll have to borrow it from you sometime.

I'm also not sure where I stand on it. You bring up a very good point - and one that I've struggled with a bit as well - when you say that it's not really a stretch to believe in literal creation when we believe that a man was god incarnate and was raised from the dead.
October 8, 2008 at 9:42 PM

It sounds remarkably similar in concept to this book, and I think you'd enjoy it. I"m going to be around your house on Saturday, and if you want to borrow my copy, message me (or reply here).
October 9, 2008 at 5:12 PM

Conspiracy Master said…
Sounds pretty interesting. When speak of creationism comes up, I think of Sarah Palin and it gives me bad nightmares.
October 10, 2008 at 12:35 AM

The Lam said…
@Skycapitan:
Hey bro, yah, next time I see you, I'll lend it to you. I think as a fellow engineer, you can definitely appreciate what it has to say, whether we choose to agree with it or not.

@Laundry:
I'm not the biggest fans of The Case For ______ books. I've read one, and skimmed a few others, but never intrigued me enough, so I kindly pass.