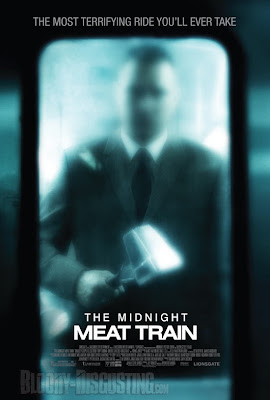 The movie follows a photographer named Leon who while using the nightlife of a city for his next project, unravels a mystery involving subway passengers who would disappear in the middle of the night. Leon's pursuits puts him on the trail of a serial killer named Mahogany, who stalks and kills the late night travellers. Soon after, Leon becomes obsessed with the whole mystery and with stopping the killer, but is in more shit than he's aware of.

The Midnight Meat Train is probably one of the better American-produced horror movies I've seen in the last few years. But I guess that isn't saying too much, as more than half the shit these days are just remakes of classics or of foreign versions. The movie feels fresh and original, and thanks to the short run time and high action, it never feels tired.

I had a few small problems with the movie. You know how sometimes in movies, a character will get obsessed with some sort of mystery, leading into madness, and they get crazier as the plot progresses? Well, the way the movie played out made it seem like only one or two days before Leon descended into madness. My sister watched this movie with me, and when the madness scene hit, we looked at each other and said the same thing: "he's crazy already?".

There's also a scene in the middle where Leon is captured by Mahogany, but for some strange reason he's allowed to live. I was thinking, shit, that's a pretty big plot hole... he kills everyone but lets Leon live? However, at the end of the movie, everything is resolved. There is quite a twist at the end. My sister didn't like it, but I thought it was an interesting concept.

Gorehounds will especially love the flick for all the blood, guts, and creative kills that make it on screen. However, one thing that bothered me was the CG blood and effects used. In horror movies, I've always enjoyed practical effects over its CG-counterpart, but that might just be a preference thing. It doesn't take away from the fun-ness of the kills, so you don't have to worry about that.

The film is stacked with a bunch of semi-relevant actors such as Brad Cooper, Leslie Bibb, Brooke Shields, and Vinnie Jones as Mahogany. Ivan Raimi makes a cameo in the middle of the movie, much to the delight of my geek senses. The acting isn't terrific, but it's on par of what you'd expect of a horror movie.

To my surprise, it was Ryuhei Kitamura who had directed it. I've been a fan of his work for years, ever since I first saw Versus, the cult-favourite, low-budget, high-action, zombie-flick. Years later he made the supposed last Godzilla movie ever, Godzilla: Final Wars, unfortunately to less fan fare. Kitamura is quite a beloved director in the geek community. Listening to his interviews, you can tell that his style is definitely influenced by American cinema. This movie marks his first foray into American movies, and thankfully is a smooth transition as compared to other asian directors who have tried to do the same (Hideo Nakata... Takashi Shimizu... Pang Brothers... I'm looking in your direction). I think it's his understanding and appreciation of Hollywood that has helped adapt his own unique style into an American film.

Another cool thing that I didn't know until the credits hit was that the original story was scribed by Clive Barker, a short story in the first Books of Blood.

Unforunately, the film went through distribution hell in the hands of Lionsgate, with a release in August in only 102 theaters. It's a shame because this was a really good horror movie that only a few people will have seen. The least they could have done was hold off for a much wider release around the Halloween season.

My friends, if you are a horror fan, I ask you to check out this movie. I guarantee its better than any of the Saw sequels that you've wasted your hard-earned money on. Give'er a try! Peace out geeks!

Unknown said…
You had me at "Midnight Meat Train"!