Life on Mars (US) 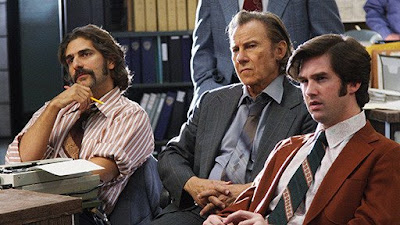 So I found a new TV show to follow this week: Life on Mars.

On the surface, it looks like another one of those police/crime drama replicas eg. CSI, NCIS, Cold Case, etc... I hate those shows! That is one of the reasons why I love Forgetting Sarah Marshall so much, in particular for their ongoing joke of mocking these shows with their faux crime drama Crime Scene: Scene of the Crime.

However, looks can be deceiving, as they say. The police/crime part is just a clever disguise to hide the fact that they are really a geeky-genre show. The first 10 minutes or so of the pilot is similar to any other police show; a bunch of cops stressed out over some generic case involving some generic kidnapper/murderer. One afternoon, after a raid, the main character's girlfriend gets kidnapped and his mind goes a little loopy. Amongst all the dizziness and confusion, he gets hit by a car, and passes out. When he wakes, he finds himself 35 years in the past, smack dab in the middle of 1973. He doesn't believe where he is... cue in the iconic imagery of the Twin Towers.

Throughout the episode, he receives subliminal messages from 2008. But is it all in his head? People around him don't seem to hear or see these messages.

What I like about the show so far is how the main character (or us, the audience) doesn't know if he is really in 1973 or is everything just a figment of his imagination. He decides that it's the latter, and that everything he sees or hears is a projection from his mind. However, so far, they've given evidence that it could be either, and I really hope they keep playing that up... never letting the audience know until the show comes to an end. I just love the time travel idea, there are so many possibilities.

The show stars Jason O'Mara, Michael Imperioli, and best of all, Harvey "the Bad-fuckin'-Lieutenant" Keitel! In other words, a bunch of badasses! There is also Gretchen Mol, who looks beautiful as a 70's closet-feminist policewoman, no doubt the future love interest for our main cop-dude.

The show is a US-remake of a British show of the same name and concept, produced in 2006.

Outside of prowrestling, I don't follow too many TV shows, however, this fall I'm glad to add Life on Mars to the list. It's on ABC every Thursday at 10 pm (I think). Or if you missed the first episode, I'm sure you can find a stream out there. Later geeks.

Unknown said…
Last week, I recorded it on the DVR but haven't had a chance to check it out. I was pretty impressed with reviews and whatnot, so I'm looking forward to sitting down and watching it sometime this weekend.
October 17, 2008 at 1:12 PM

The Lam said…
Hey friend, no spoilers please. I'm loving the show so far and would rather see it unravel. Thanks though.
October 19, 2008 at 9:40 PM