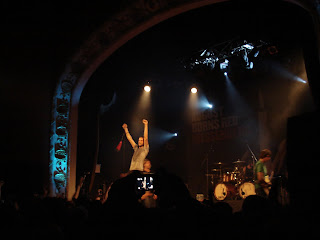 Yes, a bit of a late slip. I went to see August Burns Red play at the Opera House almost 2 weeks ago. I went to a show in August with A Static Lullaby. The show must have drawn only 150 people tops (of approx. 500 capacity), and this from a band who was selling out shows 3 years ago. I thought the screamo/metalcore/post-hardcore scene was about over, but this show was evidence that it still has some legs.

The Opera House was jam packed, it was hot sweaty fun. The line-up included This or the Apocalypse, Greeley Estates, A Skylit Drive, Sky Eats Airplane, and of course headlined by August Burns Red. Admittedly, I only know a few songs from ABR, so I wasn't too familiar with them. I basically went to the show to see Greeley Estates and A Skylit Drive. The show didn't disappoint, the energy was pretty high all night.

Anyhow, you can check out some pictures from the show (here). Adiós geeks.