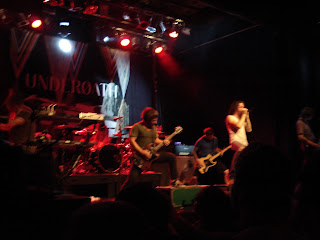 I'm fully convinced that Underoath loves Toronto, here's why. Two years ago when Define the Great Line came out, they played one special show to celebrate its release, and it was in Toronto at the Mod Club. On Tuesday, they released their latest LP effort, Lost in the Sound of Separation, and played two shows for the CD release in America: one in New York and one in Toronto. Out of all the North American cities, they picked Toronto... twice. It's clear that the Toronto crowd loved these guys right back.

On Wednesday night, I saw Underoath live for the fourth time, and much to their credit, it was just as energetic this time around. With their heavy guitar riffs, pounding drum kicks , and relentless screams, Underoath continues to redefine themselves. These guys have been my favourite band for the past 3 years, but my love for them doesn't end because of their music, it also stems from their openness about their faith, in particular, their love for Jesus. I suppose as a fellow Christian, this creates a deeper sense of connection. If you're unfamiliar with their material, I've attached a music stream so that you can listen to one of their tunes while reading this post:

The show opened up with a band called The Red Chord, from Boston. They were quite underwhelming to say the least (or the most), making it clear that the crowd was here to see Underoath, and not them. Adding to the problem was that they started their set an hour and fifteen minutes past the doors time... usually waiting 30 to 40 minutes is tolerated, but over an hour is ridiculous. This generated an unruly crowd, all the more thirsty for the headlining band.

When Underoath finally hit the stage, the crowd erupted in chaos. Bodies were flying, people were jumping, the mosh pit was smashing... good times finally arrived. They played a good mix with a few from They're Only Chasing Safety, but the majority was a mix of DTGL and LITSOS. The energy never let down in the hour and fifteen minute performance. The highlight of the night was when Spencer stopped in the middle of the set to announce that keyboardist Chris Dudley was becoming a father in May. His excitement for his new found role was evident with his ear-to-ear grins.

One of the things I love most about this band is how they declare their love for Jesus Christ near the end of each show. They credit Him for saving them, giving them purpose, keeping them alive, and letting them do what they do. They then tell the crowd if they don't feel the same way, it's okay, they love us all the same. They humble themselves by declaring that they are in no way better than any of us, we're all the same, and they just want to hang out with all of us.

It's a very bold thing to do especially at a secular concert. Of the four times I've seen them, they were met with a lukewarm reception in London, they were outright booed in Ottawa, but in Toronto (both times), the crowd erupted in cheers at the mention of their love for Jesus. I don't know if it's because there's a strong youthful Christian presence here, or if it's because the respect for who Jesus is greater than in the other cities, but damn, the crowd went nuts, and it was awesome.

As you can tell, I had a good time at the show; it's been a while since I've come home from a show drenched in sweat with a lost voice (if it's a decent show, it's usually one or the other). You can check out a few of the pics I took here. That's it for now. Later geeks.