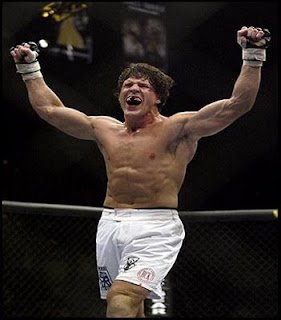 The body of the professional fighter and former UFC champion, Evan Tanner, 37, was found in the Palo Verde mountain area of California on September 8th, 2008. He was found a few miles away from his campsite on foot, with no water, where the temperatures were around 110 degrees fahrenheit. The coroner's report listed the cause of death as from heat exposure.

Tanner left Oceanside, California on September 2nd. On September 4th, he sent a text message to a friend telling him that his motorcycle was out of gas, that he was out of water, and if his friend didn't hear from him the next day, to call the authorities. Unfortunately, Evan never returned home.

I'm not the hugest MMA fan, I consider myself a casual fan, and a n00b at best. I was listening to Dave Meltzer and Bryan Alvarez of the Wrestling Observer Radio, and the story of Tanner's life sounded intriguing.

As fantastic as it sounds, Tanner ventured into the deserts in search of treasure and adventure. I kid you not. It was something that had captivated him for the past while, and finally he went off and did it. On his blog, Tanner said himself that he was getting more obsessed with the idea of finding treasure. He goes on to say that treasure to him may not necessarily mean some sort of physical or material good. Before taking off, he told some close friends that he was going out there to "cleanse" himself.

According to Meltzer, Tanner never considered himself as a fighter, it was just something he did to make a few dollars until something new came up. He considered himself a nomad or a drifter, where he'd go town to town working various odd jobs to make a few bucks. He'd stay for a couple of months, get bored, and then move on. Now and then, he'd receive offers for professional fights for large sums of money, and so he fought.

Meltzer goes on to say that Evan never meant to be a fighter, he just fell into it by complete accident. During his highschool years, he tried out for the wrestling team, never with the intention of being any good, but he was such a great athlete, and strong physically, that he became state champion in Texas in his second year. He had many offers afterwards, but didn't take any of them, and in fact stopped training his body or fighting for the next 7 years. He'd take offers every now and then to make some coin, and to fuel his drifting and his drinking problems. He was very open about his alcoholism, and in the end realized that he squandered so much that it kept him from reaching his full potential as a dedicated fighter.

In late 2007, Tanner hit rock bottom (apparently, something that happened often). Realizing he was a wreck at 36 years old, he decided to clean up his act, and concentrate on being a professional fighter. He moved to Las Vegas, Nevada to train in hopes of being the best fighter he could be. He lived in a mostly empty apartment, surrounded by books, but often found sleeping on the floor. He fought a few more matches in 2008, but would eventually leave behind the 34-8 MMA record.

What struck me about this story was not only his death, but how much his life paralled the real-life story of Christopher McCandless depicted in the book and film Into the Wild. Both men went into the wild in search of something that they had no grasp over... something that just wasn't there. They both lived and moved town to town, waiting for the next thing to come along; they went where the wind blew, and where the next adventure laid. Unfortunately, in the end, it would be nature that would catch up to both of them.

"...To think, there are still places in the world where man has not been, where he has left no footprints, where the mysteries stand secure, untouched by human eyes. I want to go to these places, the quiet, timeless, ageless places, and sit, letting silence and solitude be my teachers."
-Evan Tanner

Mike said…
I'll confess i didn't remember much of Evan Tanner, just that he was one of the original fighters in the early days of the UFC. An interesting quick story about him and his life, thanks for this post.
September 9, 2008 at 9:40 PM

Kevin said…
I don't know evan tanner, but I did read Into the Wild, twice, and it's interesting to see that similarities are drawn between these two.

Beka said…
Wow. Very interesting. He sounded like quiet the poet and intellectual. I like free spirits and thinkers like that. You would never know beneath the fighting guise what he was really wrestling with. I love his quote there. Definitely going to check out his blog.
September 10, 2008 at 1:22 PM

Beka said…
Whoah! Just read a snippet of one of his blogs, check this snippet out:

" It seems some MMA websites have reported on the story, posting up that I might die out in the desert, or that it might be my greatest opponent yet, etc. Come on guys. It's really common down in southern California to go out to the off road recreation areas in the desert about an hour away from LA and San Diego. So my plan is to go out to the desert, do some camping, ride the motorcycle, and shoot some guns. Sounds like a lot of fun to me. A lot of people do it. This isn't a version of "Into the Wild". I'm not going out into the desert with a pair of shorts and a bowie knife, to try to live off the land. I'm going fully geared up, and I'm planning on having some fun.

I do plan on going back pretty far, so I did mention in one of my posts that I wanted to make sure to have good quality gear. Any failure of gear out in the desert could cause a problem."
September 10, 2008 at 1:27 PM

The Lam said…
Hey Bex, thanks for sharing that, I missed that post. The irony of him saying it isn't like "Into the Wild" when in the end, it totally was. I like how you describe him as free-spirited. I think that's how many in the business described him as well.
September 10, 2008 at 3:23 PM

Beka said…
I love how you made the Into the Wild connection too. He even said it himself.

blankshooting said…
I have no idea who Evan Tanner was but that was a very interesting read (especially the parallel with the 'Into the Wild' guy). Thanks!
September 13, 2008 at 3:59 PM