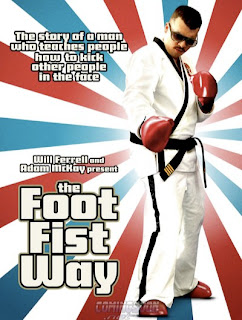 The Foot Fist Way will probably be one of my favourite movies this year when all is said and done. It may not appeal to everyone, it certainly didn't pan well with critics (it had an RT rating of 57%), but if you're the type of person that enjoys quirky or crude humour, then The Foot Fist Way is for you. By crude, I don't mean toilet humour, but rather if you find it funny seeing a young muscular man giving an uppercut to a middle-aged woman during a tae kwon do sparring session, then you'll certainly find this funny.

I had first heard of the movie when Danny McBride (the main actor and writer) made an appearance on Late Night With Conan O'Brien to promote the movie. The hilarity of it was because McBride made his appearance in character, as the tae kwon do instructor, Fred Simmons (check it out here). He was "The King of the Demo". Adding to the ingeniousness of it all was that they never once mentioned or claimed that they were promoting a movie... Simmons was just a guest promoting his tae kwon do school (after seeing his appearance, I went on the website, surprised to find info for a movie).

This movie was Jody Hill's first feature, made on a low-budget, and shot over 19 days. The movie follows Fred Simmons day to day as he operates his TKD dojo, with all the triumphs and tragedies included. That's all you really need to know about the plot. Fred doesn't have many friends his own age; he befriends (and most of the time belittles) 2 younger students at his dojo, and he has one friend from high school who is just as crazed (if not more so) in the world of TKD. And you can tell if this were real life, why this would be so... everyone has had one of these types of friends before. He is a rude and vulgar person, yelling at his students (regardless of age), and beating them recklessly.

I think the joy of watching Simmons' destructive behaviour stems from my amusement of watching fully grown adults act like 5 year old children (ie. Steve Carell in The Office, Will Ferrell in Anchorman, Talladega Nights). This has been quite a year for Danny McBride. In addition to this movie, he's also had parts in Tropic Thunder and Pineapple Express. I have no doubt within the next year or two, McBride will be a huge star... you just know there's a leading role waiting to happen.

"'People are shit. The only person that you can trust is me, your tae kwon do instructor."
-Fred Simmons; The Foot Fist Way