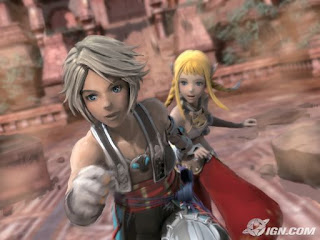 Final Fantasy XII: Revenant Wings (for the DS) is the sequel to the epic saga Final Fantasy XII found on the PS2. It follows Vaan and his band of sky pirates as they embark on new adventures. The game takes place almost immediately after the events of XII, but it can be treated as a stand alone title, though there are nods to the parent game.

The gameplay is not your typical RPG affair, rather Square-Enix chose to use an action/real-time strategy system. In doing so, they were able to preserve some of the game mechanics used in FF XII in that you'd assign your characters a command, and they would follow it until you ordered them to do something else (ie. the gambit system). However, at the same time this was not like your traditional RTS where you'd have to harvest resources and create buildings. Instead, your main characters are chosen as leaders (5 maximum per mission) and often you'd take control of portals where you'd be able to summon monsters (called espers) to do your bidding. So really all you had to do was manage your mob of characters and you would be good. The battle system worked like a 2-tier rock-paper-scissors system, the first being with melee-ranged-flying units, and then elemental attributes (ie. fire-water-lightning-earth-etc.).

So let's start with the upsides to the game. The story is very well-versed with much to chew on. In fact I think in total I clocked in 35+ hours upon completion of the game. I appreciated the simpler storyline as compared to the convoluted political drama discovered in its parent game. Aside from the main story line, in each chapter there would be side missions that you could complete for a fuller experience (I reached 90% game completion in the end, the other 10% were too tough).

The music was done beautifully for a handheld... this seems more of a common things these days I suppose, with more advanced systems and what not. What gave it more charm was that a lot of the songs were directly from XII, except changed to give it a handheld sort of feel (you know what I mean?). The fully rendered FMV's are breathtaking to look at, much like the ones done on FFIII also for the DS. Square-Enix definitely pushed the envelope in terms of FMV content.

Now the downsides. After 5 or so hours of playing, the gameplay gets repetitive. Just as long as you pick the right kinds of espers to fight for you, then it's pretty much clear sailing. Sometimes getting your characters to follow your commands was a pain in the ass. Instead of following your orders, they would fight the closest enemy to them instead, disregarding your command for them to move, fight something else, or to cast a spell. Frustrating. Another weak point was the lack of multiplayer or online play. It would have been pretty fun to challenge the armies of other players via wifi.

So in the end, if you're a Final Fantasy fanatic, then this is thumbs up (at a +20 degree angle), and if you're not a FF fan, then I'd say thumbs in the middle. Later geeks!

Unknown said…
Love your blog, would like to exchange links via blogroll.