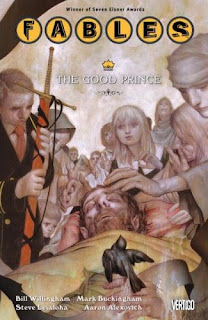 Fables has been my absolute favourite comic book series since I had started reading it three years ago. Penned by Bill Willingham and penciled by Mark Buckingham, this series has been quite the hit accumulating various accolades during its run. What makes this a well-rounded series is that the stories are always intriguing, dialogue always witty, and the characters are deep and compelling. The characters themselves are based off of established fairy tales and folklore (they call themselves Fables), except that they are in the real world. I've recommended this series to many friends, and so far none have been disappointed.

For those of you who may be unfamiliar with the series, I'll give a brief overview of the story. Many years ago, the Fables who lived peacefully in their own universe called The Homelands were driven out by a mysterious and destructive force called The Adversary. The Adversary took over all the lands that the Fables had owned. The Fables fled the Homelands to Earth seeking refuge in New York in their own little village called Fabletown. Some arrived on Earth successfully, others were not so fortunate. As all Fable lives were equally threatened, whether they were heroes or villains in the Homelands, they worked together to build a safe community hidden amongst the humans, who they refer to as the mundys (because we're so mundane I guess). It would be later on that they would discover the truth about who the Adversary are and their plans to destroy all Fables on Earth. That's basically the gist of it.

The use of fairy tale characters is captivating because we already know from our childhood who these characters are and what they're all about in their own stories. The interaction between the wide array of characters is quite entertaining, think of it as a mature version of Shrek, more violent, and on Earth. One of the characters is Bigby Wolf, known to most as The Big Bad Wolf, who in Fables is the same wolf in The Three Little Pigs and The Little Red Riding Hood. Bigby is a mysterious grizzled character, similar to Wolverine in various manners. Bigby is basically the shit. Anytime things go wrong, people come to Bigby. At one point he was the sheriff of Fabletown, but due to certain circumstances, he gives up his role. As cool as Bigby is, the character Prince Charming is probably my favourite. Prince Charming of course is known in the fairy tales as the dreamy prince, the desire of every woman in a number of fairy tales. Willingham expands on him quite a bit by making him a sleezy adulterous sonofabitch, but fortunately for him, he is also one of the smartest with a sharp tongue in Fabletown.

The Good Prince is the tenth volume from this auspicious series, collecting issues 60 to 69. The main story in this arc focuses on the character Flycatcher, known in the fairytale world as the Frog Prince, who recently rediscovers that he was once a prince and that tragedy had befouled his family. He finds his purpose and courage, amasses his own army in hopes of recapturing his land back in the Homelands. The subplot follows the rest of the Fabletown characters as they prepare for the impending war and invasion of Fabletown by The Adversary. Hints are revealed at the grand scheme of everything occuring thus far in the series... and it is epic.

Willingham continues to script together an excellent story with a plethora of clever characters. I've read all the volumes about three times, and every time I revisit the series I find it hard to put the book down. And now I eagerly wait for the next volume. Until next time, later geeks.