DTV Madness: Clash of the Crocs... Lake Placid 2 Vs. Rogue 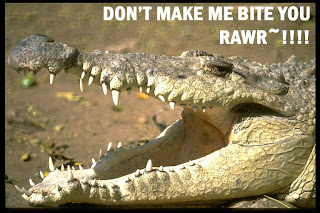 Those of you that know my movie watching habits will know that I'm a sucker for DTV releases. DTV movies are often friendly to the genre-fan, churning out endless amounts of horror schlock every month. Unfortunately, nine times out of ten, the movie will be shit, and after 10 minutes in, you start to wonder what went wrong with your life. Whenever I hit that point I always think to myself, "fuck, I've already started it, might as well get through it"... and after 90 minutes, an eruption of profanity occurs.

That being said, there are those few times when the movie is worthwhile or at least fun to watch. It takes a lot of digging to find something good, but then again you've got to get through all the dirt before you strike oil. And man, when you find it, boy does it feel good.

Last month, I had the "privilege" to watch two horror flicks that contained killer crocodiles as the main baddies, the first being Lake Placid 2 and the second being Rogue. Were they any good or did they fall into that "nine times out of ten" category?

Let's start with Lake Placid 2. This is one of those sequels that doesn't contain any of the same cast or characters from the original film. Yes, one of those kinds of sequels. The movie stars John Schneider (aka. Superman's dad in Smallville aka. Duke from The Duke's of Hazzard) so right off the bat, you know the caliber of film you're dealing with. Schneider plays a sheriff who is investigating a series of grizzly attacks at the titular, Lake Placid. A bunch of characters walk on to the screen, say their names, and shortly after, are eaten by the croc(s). Man, this movie was bad. The acting was horrible, the special effects were a joke, and there was a failure in creating an atmosphere. What made the first LP movie good was that it understood that it was campy, so they had fun with it. In this movie, all the lines were weak, and all the characters were shallow... you couldn't wait until they were eaten so you wouldn't have to see and hear them anymore. You can tell that they're trying to be funny, but it just never works. The CGI is laughable at best. The movie was produced in 2007, but if one were to just examine the effects, you could have sworn it was 1997. Thumbs down.

Rogue was a bit more of a serious affair. It was helmed by Australian director Greg McLean who a few years ago did the semi-watchable Wolf Creek. McLean was able to recruit a bunch of B-listers to fill out the leading roles in this movie which includes Michael Vartan, Radha Mitchell, and Sam Worthington... quite a few steps up from hiring Clark Kent's dad. The story follows Vartan's character as he takes part in a boring-ish river cruise in Australia. The cruise is mostly uneventful except for a brief run-in with a few local hicks, well, that is until their eventual encounter with the resident croc. Needless to say, the passengers on the cruise become food for the hungry-stalky croc. As I was watching the movie, I thought to myself, "wow, this is a pretty boring movie, but it looks good and they have semi-relevant celebrities in it". It is true, the production values were good and the cinematography was pretty great for a DTV feature... well, that is until I found out what the supposed budget was. I also thought it was quite a step down for McLean who's Wolf Creek at least saw a wide-release in America. Just as in Creek, McLean manages to create a good dark atmosphere with lingering suspense. The lack of character development is what hurt the movie... you couldn't care for everyone being eaten. The saving grace was the performances by Vartan and Mitchell who tried their best given the material.

The film was actually released in theaters in Australia, but was relegated to DTV in America. The production budget, according to its Wikipedia entry, was $25 million AUD (approximately $20.5 mil US)... a hefty sum for a DTV feature.

So in the end, LP2 was bad and Rogue was marginally decent. That's it for now, later geeks.

Jae Kay said…
Being a fellow lover of DTV and other producers of "crappy" movies I bought Lake Placid 2 as soon as I laid eyes on it.

I wish I hadn't. Just too awful for words. It seemed to me they mostly reused the entire script from the first movie just with new actors. Awful.
September 14, 2008 at 3:59 PM