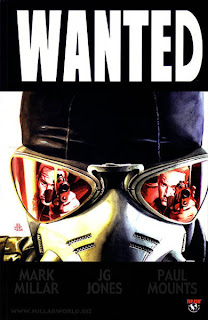 I watched this movie 2 months ago, and didn't write a post about it only because I thought nothing much of it. It was scene after scene of action held together loosely by a thin plot. I thought to myself, "meh, thumbs in the middle, it kept my attention". Last night, I finished reading the graphic novel by Mark Millar of which the movie was based on. I've decided to re-evaluate my conclusion on the movie by cranking that thumb 45 degrees south for a thumbs down decision... the graphic novel was too great.

The movie could have been so much more! In the original comic, there were so many colourful and wacky characters; aliens, robots, superheroes, supervillains, and all that stuff. Instead the movie opted out of that idea, and instead presented the mass public with a dumbed down generic-action piece that loosely resembled the comic.

The story from the book follows Wesley Gibson as he trudges through his mundane life to join a fraternity of supervillains of which his long-lost father had been employed. The key in this are the supervillains. According to their history, in 1986, there was a great war between the superheroes of the earth against the villains. The villains decided to team up in a global concentrated effort to take down the heroes, and with great success. The heroes were eliminated, and the memories of the war were wiped from all humans by use of alien technology.

At present day, the villains have divided themselves into 5 families organized around the world. They have found their "peace" with the world... doing crime in a more behind-the-scenes basis. However, there are some within the group who feel they should go back to their roots, putting crime right back into the spotlight.

Wesley is caught up in the middle of all this. Being a fast rising young villain, he is taken under the wing of the Professor, the head of one of the families. We see the underbelly of the criminal world through his eyes. He is the protagonist in the weakest sense of the word.

What I enjoyed most about this comic was all the different cool characters that filled the pages. My favourite was a villain named Shitface. He was a shapeshifting blob of a monster that was comprised of shit... specifically, the shit of the 666 worst individuals in mankind's history (which includes Hitler, Ed Gein, Jeffrey Dahmer, etc.). What made it more amusing was that almost every character was based off of other established characters in the comicbook universe. Some were more obvious than others (check their wiki for a listing, here).

Now for the movie. The beginning was similar in showing Wesley's disdain for the everyday life. Instead of a fraternity of villains it is of assassins. This takes away a certain element to the story. Assassins are typically neutral characters... usually; they are neither good nor bad... they just do what they have to do, and in this case it was the carpet machine who decided what is to be done. But maybe I'm wrong. Maybe they are villains. However, they didn't really hammer that point in, if so. The plot focused a bit more on Wesley's relationship with his dad thrown in with a bunch of twists, swerves, and other nonsense. The plot just seemed like an excuse to ring in the next action scene.

In going from the comicbook medium to the silverscreen, I think what makes a successful movie is capturing the spirit of the original material. If you look at the recent successful transitions, it's clear the director intentionally captured the spirit (eg. the Batman reboot, Iron Man, 300, and Spider-man).

Looking into the near future, there aren't many comic book movies I'm looking forward to with the exception of The Watchmen. Will it capture the spirit? We shall see. But from everything I've read and seen, all indications point to a yes. Later geeks.

Beka said…
Ha! However weird, I love the idea of Shitface. Pretty creative and unique idea for a villain. And compromised of the 666 worst individuals - clever. I like.
August 28, 2008 at 8:01 PM

Matt said…
Yes. I was rather unimpressed with Wanted. Although, my basis does not have anything to do with the comic. I personally found plot falls and it just flat-out wasn't enough to maintain my interest.
August 30, 2008 at 3:26 PM