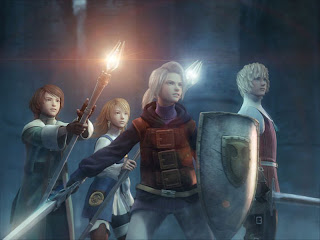 This is a bit of a late slip. I finished Final Fantasy III for the DS about 2 weeks ago.

For those that know me and my gaming habits well, you'll know that I'm quite the Final Fantasy junkie. In fact, you wouldn't be wrong to assume that the FF series played an important part in forging the geek in me. This made it easy to decide what consoles to buy when the time came. It has always relied on the question, "which system will the next Final Fantasy game be released on?".

FFIII was the only game in the 12 game series that had not made its debut on American soils. Instead of just a straight-up rehash and 8-bit (or 16-bit) graphics, Square-Enix took it to the next level and rendered the game fully in 3D, including a few FMVs, as well as enhancing the soundtrack. What we end up with is a beautifully looking game that pushes the DS to its limits.

This game was the first one in the series to use the now renowned job system. They offered almost 2 dozen different jobs, although some were clearly more useful than others; I think in the end I used only 8 of them.

The challenge of the game was quite unforgiving sometimes. In RPGs nowadays, we are far too much pampered with tons of in-dungeon save points. In FFIII, you can find yourself wandering a dungeon for 30 minutes, only to be wiped out by a massive monster, and having to start all over again... reminding us of the pains of yesteryear.

In the end, the game was definitely fun, but not definitely not a standout of the epic series. However, the game should be given credit for first introducing the job system to the FF series.

I'm playing through FF XII: Revenant Wings on the DS right now, and it is quite good, but I'm only a third through. Anyhow, that's it for now, later geeks.