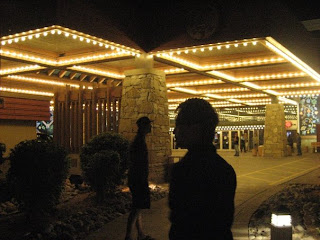 The above photo is courtesy of my friend Beka. The darker figure in the back is me, and the closer one is my friend Keith. Yes my fellow geeks, two days ago I stepped onto the casino floors for the first time. It was both what I expected and in a way, not what I expected. We headed to Casino Rama late in the evening, after a full day of hanging out with some friends in Orillia.

One of the things I first noticed after stepping in was that it seemed so much smaller than depicted in the commercials. The majority of the casino floor was devoted to slots, and I'd say 1/6th of the floor area were the tables (cards, roulette, craps, etc).

Another thing we noticed (and expected) were all the lifeless people that sat in front of the slot machines and gambled all their money away. It was clearly an aging crowd dominating the slot areas as well. I was reminded of a line from the Simpsons, when Marge becomes a gambling addict:

Homer Simpson: The only monster here is the gambling monster that has enslaved your mother! I call him Gamblor, and it's time to snatch your mother from his neon claws!

So what I had in mind when I got there was to withdraw $20 from my bank account, and risk it all (I'm a cheap n00b gambler). I accepted the fact that I would most likely lose it all, but that there would be a small chance that I could win some. We looked at the slot machines and were immediately confused. We thought all we had to do was put in money and pull the lever, we didn't know anything about buttons, 'credits', lines, increased payouts and what not. So we, being the n00bs, examined the machines to try and figure it out. Eventually Beka grabbed a veteran pro (an asian woman at that) who explained to us how it worked. It was actually simpler than it seemed, thus proving our n00bness.

We tried the 25¢ machines first which proved to be a failure; we both lost our $5 in mere minutes. We then moved onto the 5¢ machines which were a bit more fruitful. Down to $15 already, I inserted another $5 and tried my luck. I used up to around $2.50 and then won $4 (so I stood at around $16.50 of my original $20). After a few more presses I won 100 credits, it seemed so much, but alas it was only $5 bringing me to about $20.35. I said to my friends, "Okay, I'm done, but let me at least risk the 35¢ to see if I can make more or at least bring it to even". Unfortunately, I was unforunate. In the end, I came out not winning... but not losing either. As Keith humourously put it, "Essentially, you came to the casino to withdraw money". I think God was giving me a chance to bail out, and I took it.

After leaving the casino, I still had that urge to go back and spend my money... the allure of gambling was strong... when I closed my eyes, in my head, all I could see or hear was the flashy lights and sounds of the slot machines. In hindsight, I'm fortunate to have good friends to keep me from wasting my money. Had they not been there, I would have easily used up my $20, and would not be surprised if I withdrew more money and gambled it all away.

According to Overcominggambling.com, in the US, the average debt inccured by a male pathological gambler is between $55,000 and $90,000. And that's only from one gambler. I could think of so much to do with $55,000. That gave me an idea. If you the reader, consider yourself a gambling addict, please send me an email. I will reply to you with my mailing address where you can send me a cheque for the amount of money that you would plan to gamble with. I can guarantee you that I will be happy to spend your money, and would even include a post about what I did with your money. I know you won't gain much, but you can at least rest assured that you're making someone else happy.