Gail Kim Leaving TNA and Other Thoughts On Women In Wrestlin 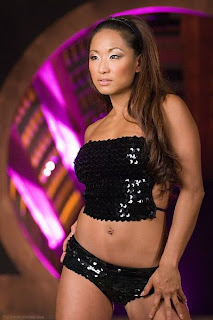 On Wednesday, August 20th 2008, it was announced that Gail Kim was leaving TNA and was signing back with WWE. This met fans with confusion as Kim was a prominent player in the TNA Knockout's division. The Knockout's division started not even a year ago and came to fruition with the crowning of Gail Kim as champion after a gauntlet match at Bound for Glory. Clearly the division was centered around Gail Kim as the ultimate babyface and her arch-rival, Awesome Kong as the ultimate heel. It was so classic and it was so simple. The Knockout's division basically grew from around these two, and it was clearly catching the attention of TNA fans.

I've said it before, there are only two reasons to watch TNA: firstly is for the X-Division and secondly, but equally, is for the women's Knockouts Division. TNA claims that they do all those wacky and stip matches in order to distinguish their product from WWE's. But if they take a step back and look at what they have, they are already distinguished, in regards to the X and Knockouts Division... there's no need for stupid angles and stip matches~!!

In particular, with the Knockout's Division, what makes them so special is that they (for the most part) hire women who were initially trained as wrestlers. They may not be tall thin bikini-type models (a la WWE Divas), but clearly they are beautiful... and they can work!!!!! The booking agents for TNA's heavyweight division should really watch what the other agent's are doing for the Knockouts division; their angles make sense and they draw good heat.

WWE uses a reverse approach of hiring bikini models and then converting them into what they call wrestlers (or Divas). With the exception of one or two Divas, the division is a joke; there's a lack of heat in the matches and the crowd can clearly be seen as bored and ready for the next match. They are beautiful women, there's no denying that, but a part of me thinks that people go to wrestling events primarily to see wrestling.

Again, what separates the Knockouts from the Divas is that they create characters which develops into intrigue for the fans. There's all sorts of colourful characters: a beer chugging trailer trash (basically a woman Steve Austin), a punk rock chick, a mysterious gargantuan woman (and her equally mysterious middle eastern female manager), a cowgirl (the pride of Tennesee), and so forth. The characters they play and their mannerisms help them distinguish each other from being just generic women wrestlers. In WWE, it's quite different; they are basically distinguished by the colour of their hair. Case in point, there was a Divas battle royal some months ago, and even the commentators were getting confused with who was who, and who was getting eliminated.

So as shitty as the TNA product can be, they sure know how to handle their women's division. Can you imagine WWE placing a women's match in their main event slot on a Raw or Smackdown? Me neither. TNA is able to not only place a Knockout's match as the main event, but it draws even more viewers than the men's heavyweight main event. The following is data from the Wrestling Observer Newsletter (issues August 11th and 25th of this year): 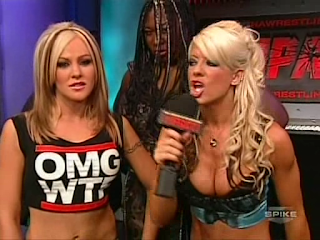 Velvet Sky's shirt says it all, "OMG WTF". There's not much more to say, the proof is in the pudding. TNA, continue with the good work with the women. WWE, open your eyes, open your minds. Later geeks.