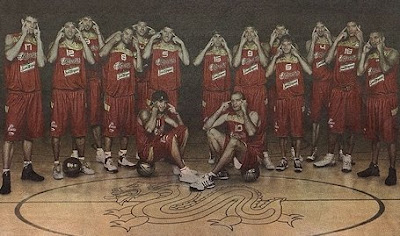 This is an idea that I'll try once a week or every two weeks. Each week I'll try to pick something that made the news and yet exercises in stupidity so much that it deserves an honorary 'fuck off!'. This week's Fuck Offs go to the Men's Spanish Olympic Basketball Team. The team posed for a picture holding their fingers by their eyes, mocking the Chinese because apparently we have slanted eyes. The photo was for an advertisement for a Spanish courier company called Seur. So fuck you Seur! Fuck you and your dumb ideas!

But worst is the men's team who went through with it. Did you guys really think it was a good idea? Fuck you Men's Spanish Olympic Basketball Team, fuck you.