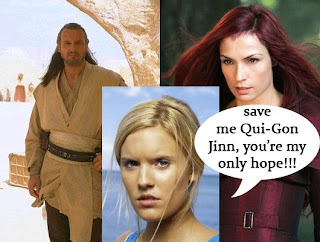 I couldn't find a poster that I liked for this movie, so I assembled a picture of my own. Anyhow, this movie fuckin' ruled. It had an easy to follow plot, some kick-ass action, and a Jedi-Master on a rampage.

The story goes like this: One day Qui-Gon Jinn and Jean Grey (probably the Phoenix actually, she was in major bitch mode) had a child named Shannon from Lost (who must have escaped the island and resurrected). Although Qui-Gon and Jean are separated, it shows that Qui-Gon living a happy life by himself, with the comfort of close friends, who work together doing high-level bodyguard stuff. In the past, Qui-Gon worked as a secret agent of some sort (most likely of the Jedi flavour). Everything is pretty happy until one day Shannon goes off to France and gets kidnapped. Queue in non-stop action. Qui-Gon heads off to France with just the shirt on his back and the Force in his hands to find his little girl. Heads are cracked, necks are broken as he tracks down his daughter.

This movie was basically the Qui-Gon Jinn Show, all the other characters were either secondary or fodder for an ass-kicking. The action closer to the visceral-type found in the Bourne-series rather than some flashy martial arts a la The Transporter series.

Qui-Gon has a pretty bad-ass monologue early in the film, it went like this:

"I don't know who you are. I don't know what you want. If you are looking for ransom, I can tell you I don't have money. But what I do have are a very particular set of skills; skills I have acquired over a very long career. Skills that make me a nightmare for people like you. If you let my daughter go now, that'll be the end of it. I will not look for you, I will not pursue you. But if you don't, I will look for you, I will find you, and I will kill you."

I guess what he failed to tell the perp's was that those certain 'skills' were Jedi-Master skills, I'm sure they would have let his daughter go had they known that.

This was Pierre Morel's sophomore feature having helmed 2004's adrenaline rush, District 13. Morel is no stranger to visceral action having worked on a slew of other action movies (albeit not as the director). Much like D13, he delivers an action-filled feature here with a simple story. The first 20 to 25 minutes are spent character building to get us to feel for Qui-Gon when the shit hits the fan. And feel, do we.

Check it out when it comes out, I think it's scheduled for sometime in September. That's it for now, later geeks.