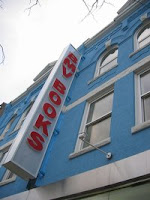 If you're a DVD-enthusiast but still a cash-strapped post-secondary student, then you'll appreciate the world of used or previously viewed DVDs. I'd say about 75% of the time my DVD purchases are of the previously viewed version. Here are a few of my favourite places, highlighting some of their pros and cons.

CD Cat (613 Yonge St.)
CD Cat is primarily a used CD store, but it also carries an assortment of DVDs (as well as some VHS). Well on the plus side, they carry a lot of albums from scene bands. This place is good for when you're looking for any special editions of a movie or 2-disc versions. Their collection is quite eclectic compared to other stores. The drawbacks are that their collection is smaller than some and their prices can be quite high, nearing retail. Sometimes you can get a better deal at HMV with all their 2 for $20, $25, $30 deals (and they're brand new!), as compared to let's say picking up Death Proof here, which may cost you $17.

Game Centre (730 Yonge St.)
Although a video game store (an excellent one at that, really great for pre-owned games) they carry quite a large collection of used DVDs. The good things are that usually they offer deals (ie. buy 2 get one free, or some sort of discount) thus making it worth your buck. The bad thing is that they have no proper way of sorting their collection, so you'll have to look very carefully if you're trying to lock down something specifically. It can be annoying because they're all over the store, but fear not, gems have been found.

BMV (3 locations)
There are 3 locations for BMV, each one of them a bit different. The pricings basically the same in each store. One drawback is that, like CD Cat, you might find a better deal buying the brand new versions, but rarely.
Finally, the best one is...

Blockbuster Video (anywhere)
Oddly enough, the most corporate one. I like this one best mostly because of the money it saves me. For example, this week I picked up Paprika and The Orphanage together for $16. Blockbuster is good because usually they offer deals such as 25% of all purchases, or buy 2 get 1 free, 2 for $20, $16, and so forth. Their selection is comprised of mostly newer releases (pro and a con), so it may be harder to find old stuff (but they usually do have a few lying around). It's a great place to go to get the cheapest new releases though. Drawbacks are as mentioned the lack of depth in their collection, the DVD cases (I hate those Blockbuster cases!), and their lack of special editions. Don't expect to find any special editions or 2-disc versions of movies; they're mostly the barebones DVD versions of the movie.

That's all for now. Go save a buck! Later geeks.

I noticed you (intentionally?) strayed from the topic of um, not-so-legal DVD's.

The Lam said…
Well, I was only recommending places that I like shopping at. I don't buy any of the fake DVDs so, yes, it was intentionally left off.

On fake DVDs, I'd have less of a problem if the vendors were giving the DVDs away for free than making a profit off of someone else's work. Other than that, I like owning the legit copies.
August 9, 2008 at 4:11 PM