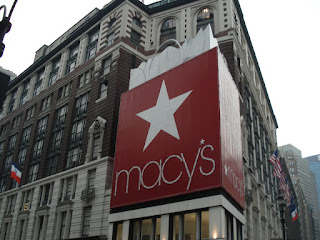 New York is a big city, and in a big city there's lots to do. With so much to see and do, where do you start? One of the problems with going to such a large city is that there's so much you want to do, but it's nearly impossible to do it all in a weekend (or a week for myself). 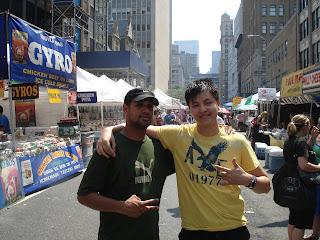 The thing we probably did together the most was shopping. Keep in mind that my travel party was 4 girls and 2 guys (effectively me, the oriental, and my friend Rajiv, the token brown guy... collectively, Harold and Kumar). We went to a lot of the more decently priced fashion stores, with a double trip to the world's largest department store, Macy's. 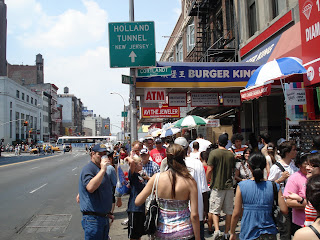 We went to Chinatown on Friday in hopes of finding cheap goods. Chinatown was a lot different than I remembered in days past. For one thing, there were a lot more tourists. The girls were hoping to score some knock-off bags which was a challenge to find sellers. We noticed that there were tons of policemen patrolling the area, trying to crackdown on vendors selling fake stuff... this did not help to our cause. Vendors were nervous to tell us if they had any goods or not, in fear that we were undercover policemen or some other authority. We spent about 2 hours in Canal St. and we finally lucked out. It was one of the SKETCHIEST things I've ever seen happen though. It went down like this. Me and Rajiv were waiting outside one of the purse stores while the girls went inside to look around. They must have asked the vendor if they carried any knock-offs. My back was facing the store, so I didn't see it all. But when I turned around, all I saw was the back wall open up into a pit of darkness, with my 4 friends being sucked into the unknown. It was totally something out of a horror movie. It was sketchy because you never know what could happen back there. You could be robbed, raped, and killed, and we would never know. But alas, my imagination was just running wild, and there were only fake bags back there. My friends exited safely with their new purchases in hand. It was funny though. As Rajiv and I waited outside, the two owners (a wife and husband I presume) kept talking softly with each other while looking at the two of us. Our guess was that they didn't like us standing in front of their store, which I suppose would draw some suspicion to the coppers patrolling the area. However, they never told us to leave or anything. It was just funny. Me and Rajiv laughed while they bickered to each other. That's right, sweat it out.

We were very touristy and did lots of sightseeing things. We did a $25 water taxi tour of the New York Bay area which circled the Statue of Liberty, passed by the four manmade waterfalls (which we heckled), and passed under all the major bridges. The tour guide was good, it was a bit costly at $25. Later we found coupons in the tour books at our hotel that would have saved us $5 each... d'oh!!! We went to see the Ground Zero, site of the WTC attacks. It was a bit eerie seeing the large open spaces and the new constructions going on, to think that almost 3,000 people were killed, right in front of where we stood. What's interesting is that the number 3,000 may be a lot higher as it does not account for all the homeless people and illegal workers that might have been in that area (we read this piece of information on an article posted on a fence).

One of the peeves I had with the City was that it was tough finding public washrooms at times. It was tough relying on fast-food restaurants, as most of the time they would only have 2 urinals and 1 toilet max. If you had an emergency and really had to go, you'd be shit out of luck (no pun intended). Macy's, as the self-proclaimed largest department store in the world, suffered the worst with this problem. Perhaps I was searching the wrong places, but I found only 2 sets (2!!!!!!!!) of washrooms for men there. 2 sets. Keep in mind that there are at least 7 floors. 2 sets (2!!!!!!! TWO!!!!!! DEUX!!!!!! DOS!!!!!! 二!!!!!!!). Needless to say, there were lineups at the men's washrooms... something I've never seen before in Toronto. Washrooms were usually not as cleansy as those you would find in Toronto, 1 point for Toronto. But I can't fully blame them. Maybe I'm just looking at all the wrong places. I guess it's easier in Toronto because I know the city better and therefore know where the good/clean ones are. 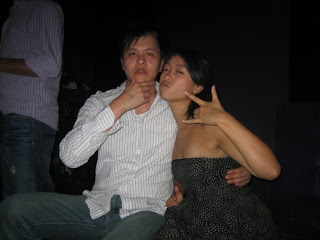 We did a fair amount of partying down and tearing up in the City. I think I enjoyed this place called The Grand the most. The place was a bit pricey for my taste, but it had a good atmosphere, good vibe, and killer music (credit the DJ). If you have deep wallets, then I must recommend the bottle service to you. Oh boy. They treat you like you're a celebrity or a superstar of some sort. Keep in mind you're dropping about $350 minimum per bottle. We ordered I think 3 or 4 bottles, my head was spinning thinking about the costs. Rajiv had a friend there named Mehar who took care of us that weekend. This was a great man. He never let us touch the bill and just wanted us to have a good time... And a good time we had! On Saturday night we went to a club in Times Square called Spotlight. It was 4 floors of partying. It was pretty nice too. We went on a night when they were promoting some place called Hardy's, and so there were tons of bikini models walking around. No complaints. Atmosphere didn't feel as intimate as The Grand probably due to its size, but it was still a good time. 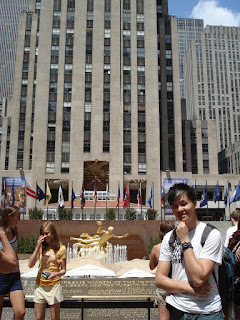 On Sunday, my friends left back for Toronto, and I was alone to brave the City. I stayed with my relatives from Sunday to Wednesday. It felt very different wandering the city by myself than with a group of friends. On one hand it was easier to decide what I wanted to do and just do it, but on the other hand, it could be lonesome if you wanted someone to talk to or just shoot the shit with. That said, I think I got the chance to see more of the city (especially more of the geeky aspects of it) when I was solo trekking. I did a tour of the NBC Studios in Rockefeller Centre which was pretty fun. I got to see the studios where they shot Saturday Night Live, Conan O'Brien, and the NBC Nightly News. All three studios were noticeably smaller than they appear on TV all due to the use of wide-angled lensed cameras. 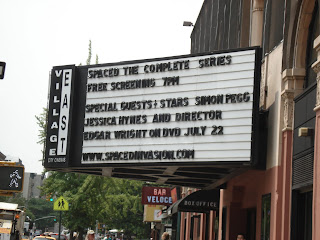 East Village was by far my favourite place to wander. They had lots of chic little shops be it geeky toy shops, or little boutiques for vintage clothes. Just think of it as a large Kensington Market (from Toronto). The geekiest of all geek things I stumbled upon was that Simon Pegg and Edgar Wright were coming on the Tuesday night that I was there to promote the release of the Spaced DVD set. Excuse me. SIMON PEGG AND EDGAR WRIGHT HOLY GEEKGASMS!!!!!!!!!! They were going to do a marathon at one of the small theaters there. How 1337 is that? On top of that, later on I went to one of the Virgin Megastores there and the place was packed. I was wondering what was going on, I thought it was because they were having a $10 sale throughout the store (on various DVDs, CDs, and books). I was wrong. The afforementioned Pegg and Wright were going to be there later that afternoon to do signings!!! Unfortunately for the geek in me, I had other things to do and see than lining up for 2-3 hours for an autograph. Were this in Toronto, I would definitely line up.

That is all for now.

This was a long post. Like I said, big city, lots to do. And I didn't even cover everything. Thanks for reading. Next up will be a short post on my family there. Later geeks.

Don't mind the fact that you're only pretending to stay there, the lobby is on the 5th floor, and that the concierge is looking at you funny.
August 6, 2008 at 7:03 PM