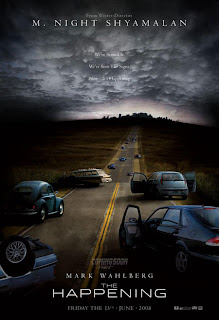 Admittedly, I've never seen The Sixth Sense. The only reason is that the ending was spoiled for me before I got the chance, so I just felt like I wouldn't get that same jaw-dropping surprise at the end as (unspoiled) first time viewers would. However, having seen bits and pieces of it, I respected the material, and the director for that matter. With Unbreakable and Signs, under M. Night's belt, it seemed what we had here was a gifted storyteller; capable of creating an atmosphere and suspense. He followed those up with The Village, which generally received a mix reaction, but for the most part I enjoyed it. Even though there were issues with the way he cut it, I thought he still managed to craft an interesting story. Then came Lady in the Water. Something had gone awry here. I have no doubt that if he were to remove all that self-referential bullshit, that it would have been alright. This was more of a rant than a movie. But you know, at least it had good acting by Paul Giamatti.

That brings us to The HapPenis. Boy... let me tell you about this movie. There are few times... FEW, when a group of friends see a movie, and there is a unanimous feeling towards it. Not everyone will like everything that everyone else does, that just the fact of life; you can't please every single person. I went to see this movie with 7 friends, and it was unanimous... this movie sucked!!! The story? Shitty. The acting? Shitty. The dialogue? Shitty! Those are the only words that can be used to describe this. It's so far removed from his other works that it's hard to believe that this was made by the same director/writer/shit-disturber. MNS has surely fallen from greatness, and it must hurt.

The only thing that saved this movie was totally unrelated to the actual movie! With about 15 minutes left of the movie, the projector had an error and shut off. The manager walked in and promised the audience refunds. How great is this? This, my friends, is proof that there is a God. He knew we were suffering, He came down and saved us from this movie. How I love Thee.

So save yourself some time. Do not go watch The HapPenis. There is one small ray of hope though. When you hit rock bottom, there's nowhere to go but up... that is unless MNS likes it down there, but let's hope not.