Hanging out with THE STRANGERS 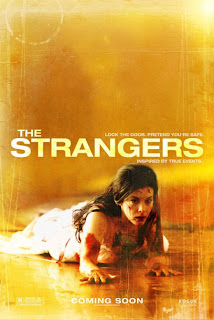 I caught The Strangers the other night, and I can say that I was mostly entertained. The movie felt like a throwback to old school 70's genre movies brought to the 21st century, sometimes channeling elements from John Carpenter's original Halloween, and the more current, Funny Games by Michael Haneke. In fact, with the exception of cell phones, there were no devices to tie the movie down to this century. I mean, they even used a record player to play music. Who does that anymore!?!? It's just fucking creepy! Supposedly, this true story occured in 2005 too. But I digress.

The first half of the movie did well to make us care for the characters as well as building suspense. The plot, for those who are unfamiliar, has a young couple returning to a remote country home late at night after a friend's wedding reception. The couple, played by Scott Speedman and Liv Tyler, are themselves at an emotional state due to a marriage proposal that fell through earlier in the evening. Cue in three mysterious strangers in creepy masks who stalk and harass the couple throughout the night (it should be noted that one of the strangers sports a potatoe-sac-like-mask, perhaps a nod to Jason Vorhees of Friday the 13th Part 2?). The second half was closer to a typical thrill ride, nothing special, but nothing wrong either. Yes, the plot is paper thin, but it's the execution of it that truly delivers.

First time director Bryan Bertino understands how to create a terrifying sense of suspense. He gives the audience glimpses of the strangers lurking in the background, unbeknownst to the couple, rather than the cheap jump-scares offered by a typical-Hollywood horror flick. It's this suspense that is the strong point to this movie. To borrow a quote from Roger Ebert in describing Hitchcock's Rear Window, "A bomb under a table goes off, and that's surprise. We know the bomb is under the table but NOT when it will go off, and that's suspense." Judging by the audience reaction at the theater, it succeeded in instilling terror to its audience.

The audience is made to feel sympathetic for the couple simply because she rejected his marriage proposal, and so establishing their emotional vulnerability. Add to that mix the deranged strangers, and you've got a couple who are at a low point after another low point. The shit hits the proverbial fan, and it couldn't be at a worst time.

The only real beef I had with the movie was the final shot. It just felt like typical-Hollywood bullshit whereas the rest of the movie was a bit more bold in some of its choices.

If you're a fan of cookie-cutter horror and are expecting some cheap thrills, then this movie might not be for you. But if you're looking for a genuine fright experience, then I'd say to give The Strangers a shot.